This Congregation Welcomes Everyone

I developed this artwork for Integrity/Washington. We sent this sign to every congregation in the Episcopal Diocese of Washington that declared itself welcoming of LGBT people. 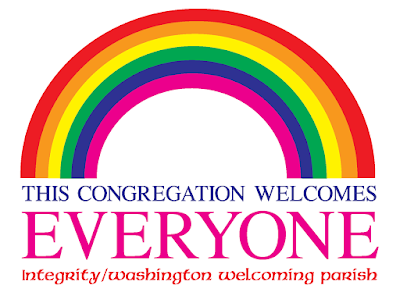 "A Book of Revelations" Press Release

WASHINGTON, D.C.--Integrity/Washington announced this week that it was donating a gay Christian book to all Fairfax County Public Libraries.  The purpose of the donation is to counter the libraries' recent purchase of anti-gay titles, which was forced by radical fundamentalists.

"Religious extremists spread the myth that it is impossible to be both a dedicated Christian and gay or lesbian," said John Bradley, the co-convener of the group.  "But the truth is that there are millions of gay and lesbian people who faithfully worship Christ and serve the church.  Sadly, many gay and lesbian Christians have been forced by homophobes to make a choice between their spirituality and sexuality.  This has caused incredible anguish.  We want all lesbian and gay Christians who are struggling to integrate these two parts of themselves, especially young people, to know that they can joyfully love God and someone of the same sex.  We were born gay by the grace of God and we are unconditionally loved by the One who made us."

The publication being donated by Integrity is "A Book of Revelations," a collection of 52 autobiographies of gay and lesbian Episcopalians.  The donation is being made as part of a book drive sponsored by the Fairfax Lesbian and Gay Citizens Association (FLGCA).  FLGCA is continuing to accept donations of pro-gay books of all types through the month of June.  For more information, contact Tracey L. Kennedy, the coordinator of the book drive, at REDACTED.

Integrity/Washington is a group of local lesbian and gay Episcopalians.  They describe their mission as:  1) helping gay and lesbian people integrate their spirituality and sexuality, 2) educating the larger church about lesbian and gay people, and 3) sharing the love of Christ with the whole gay and lesbian community.  Integrity meets on the second and fourth Friday nights of each month, 7:30 p.m., at St. Thomas' Parish, 1772 Church Street, near Dupont Circle.
Newer Posts Older Posts Home
Subscribe to: Posts (Atom)